In this One week touring Morocco  will takes you to enjoy the main historical part of the country. For this reason, Morocco kingdom is very rich of the old history, traditions and customs. The imperial metropolises refer to the four cities that were the capital of Morocco in different periods of history, and they are as follows:

Marrakech: To begin with, Marrakesh is considered the capital of an empire par excellence, as it is the center of the three greatest empires that appeared in the Islamic West, the Almoravids, the Almohads and the Saadians.

Rabat: Indeed, Rabat played the role of the capital for the first time during the reign of the Almohad Caliph Ya’qub al-Mansur in the 12th century AD, before becoming the capital of Morocco since 1912 AD.

Meknes: It is called the Ismaili capital, as it was the capital of Morocco during the reign of Sultan Moulay Ismail, this powerful sultan who was able to expand the borders of Morocco in the seventeenth century AD to the banks of the Senegal River in the south.

Casablanca: In fact, Casablanca is also a metropolise but modern one. It is the largest city in Morocco and its commercial capital. It is said that a visitor finds in the markets and urban areas common denominators that combine many cities such as Damascus, Cairo, Baghdad and Jerusalem, in addition to the traditions of Spanish and Italian cafés. Morocco tours from Casablanca. 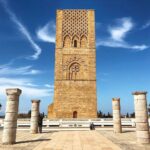 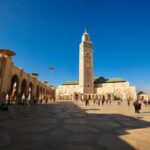 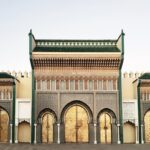 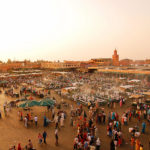 Pick up location: You can start the tour either from airport, hotel, train station or port.

Departure time: If it is convenient, better to start at 8:30am from your location.

Drop off location: where you prefer to end your 7 days Moroccan cities tour.

First day of the 7 Days Morocco Imperial cities tour. You will be met at Casablanca’s Mohammed V airport to start your tour of the commercial capital of Morocco. (Depending on your arrival time we may drive you to your hotel before commencing the tour). This city tour will take you to see the bustling centre with its Art Deco architecture and the fashionable seaside resort of Corniche d’Aiin Diab. You will also visit the magnificent Hassan II mosque. It is the second largest religious building in the world, which is open to non-Muslims. As result, you are allowed to get in as well and visit the mosque. Imperial Cities Tour in 7 days from Casablanca.

After breakfast, at your hotel, we set off for Rabat. Rabat is he political and administrative capital of Morocco. There you will visit the picturesque Oudaya Kasbah, the Hassan Tower and the Chellah Necropolis. Leaving Rabat and heading to Meknes. There you will have the opportunity to see Bab Mansour el-Aleuj (Gate of the Victorius Renegade). Therefore, it is the finest gate in Meknes or even Morocco. Your visit along the medina ramparts will include the Mausoleum of Moulay Ismail, as well as, Heri-es-Souani and the Bassin de l’Ageudal.

Around 9am we leave the Ismaalian capital behind and travel through the countryside arriving at the ancient roman town of Volubilis. There you will have time to explore this archaeological site which features the best preserved Roman ruins in northern Africa, a UNESCO World Heritage site in 1997. Of course, the most interest is the Basilica, mosaic of Diana and the Bathing Nymphs and Triumphal Arch. Later on, we continue on to the Imperial city of Fes where you will stay overnight in a riad at the heart of the medina.

Today you are going to spend most of the day with a local guide exploring the attractions of Fes. The city was founded 1,000 years ago by the second Moulay Idriss. Your tour starts from the Royal Palace gate and takes you through the narrow streets of the medina to the Jewish Quarter and the Tanneries. This tour highlights all the sites with cultural and historical interest including the Bou Inania Medersa and the Karaouiyine Mosque. Afterwards you have the opportunity to visit the ceramics cooperative to see traditional Moroccan crafts. In the afternoon we will take you to admire the panoramic view over the medina and visit the new city to experience modern Fes.

We leave Fes after breakfast to travel across the varied landscape of the Middle Atlas mountains. We will drive through Ifrane, known as “Little Switzerland” due to its appearance as a Swiss Alpine resort. Also a modern town on the edge of the great Tadla plain. The town is renowned for its oranges and olive groves which stretch to the horizon. Continuing on to Marrakech we pass through some of the richest agricultural areas of the country.

In the morning, your local guide will take you to see the historic sites of Marrakech. For instance; the Koutoubia Mosque, Jemma el Fna square, the souks of the Medina, the Bahia Palace, the Saadian Tombs and the famous Ben Youssef Medersa. Furthermore, in the afternoon your private driver/guide will take you to visit the Majorelle and Menara gardens. Free time to dinner in a local restaurant. Overnight at your riad/hotel.

What is include in the trip 7 day tour Morocco:

Not include in 7 days tour Morocco cities:

1.How to book the 7 day Morocco imperial city tour?

To book your Moroccan 7-day imperial cities tour, you have to send us an email with date you prefer and number of days. We are going to get back to you as soon as possible to inform you with all details needed.

2.How to confirm my tour with you?

Confirming your tour with us a deposit of 15% is needed to be paid. For example, when we agree on the itinerary and the price, you can send us deposit to get our confirmation email.

3.Can I customize my tour with you?

Yes our tours are all tailor made for you and we can customize the tour to meet your needs and requirements. Also, it is possible to add more days and more places to the tour if you interested.